If you’re a fan of first-person shooter games and you just happen to own an Apple iPhone, then I think we may have some great news for you. Mobile video game publisher Chillingo has recently announced that it will be bringing the classic PC game to the iPhone very soon.

As Daniel over on the intomobile.com website recently reported, the Painkiller game — which sees players take on the role of Daniel Garner as he attempts to stop a war between Heaven and Hell — has a lot of similarities to old school FPS’s such as Quake and Doom.

The iOS version will feature a total of 24 levels, which according to Anthony Usher at pocketgamer.co.uk is spread over a variety of locations including a lunatic asylum and a medieval castle. The game will also feature a number of memorable weapons, such as the 3-bladed melee weapon. 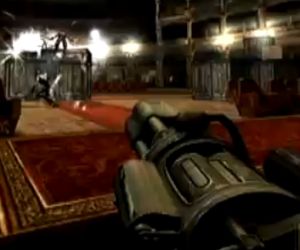 Players will be able to control their character by using the two on-screen virtual analog sticks. Although there has been no mention of a specific release date, it is expected to arrive on the Apple App Store in about a month or two. Have you played the PC version of Painkiller before?