Earlier this month we treated you to a teaser video of the new Pagani Huayra; back then we were uncertain of its name and specs, as it was all speculation. However, we can now tell you that the supercar has been officially announced. We do not consider ourselves experts when it comes to the styling of a car — but how can you not fall in love with this machine?

You have to love how Autoblog’s Jeremy Korzeniewski describes the front-end of the Huayra, by saying that it is like a “bottom-feeder”, and we do have to agree there — not that it’s a bad thing. It is some of the other design features that help to take some of the attention away from the front, such as the numerous slates and the gullwing doors, which have also been put to good use on the Mercedes-Benz SLS AMG.

Some of you will think that all those little aero tweaks make the vehicle look awesome, but they also help to keep the car planted to the road when traveling fast or taking those corners. When we say fast, we mean fast — 230mph to be exact. 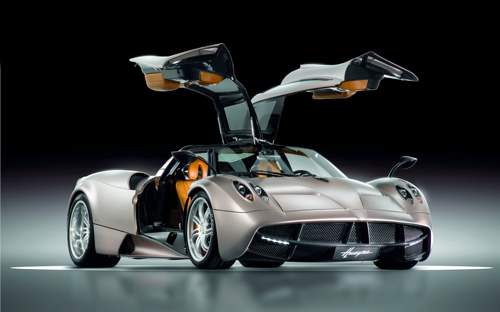 The power comes from a 6.0-liter twin-turbo V12 engine, which has been produced by Mercedes-Benz AMG. I can remember getting excited when I got my first five-speed transmission, so imagine how I would feel if I had a seven-speed dual-clutch gearbox like the Pagani Huayra will have?

Jamie Corstorphine from InsideLine has been at a recent promo video shoot for the new supercar, and notes that this is “more than just an evolution of the Zonda”, and we would have to agree. We have no official price yet, but Corstorphine believes that it will be around the $1.4 million mark.

How does the Pagani Huayra compare against the Bugatti Veyron — looks not speed?