The launch trailer is now live for Call of Duty Advanced Warfare Zombies, ahead of the exciting release on January 27 – remember for Xbox One and Xbox 360 platforms first.

Within that trailer though, we noticed some teases that Sledgehammer included in the clip that probably needs further discussion.

We say this, as Sledgehammer may have just teased the return of their version of a Advanced Warfare zombies Pack a Punch machine – i.e, the infamous device that lets you spend your points on an upgraded version of an existing weapon.

It has been a fan-favorite in every single zombies map from Treyarch and now it looks like Sledgehammer are going to be bringing their version to fans as well. 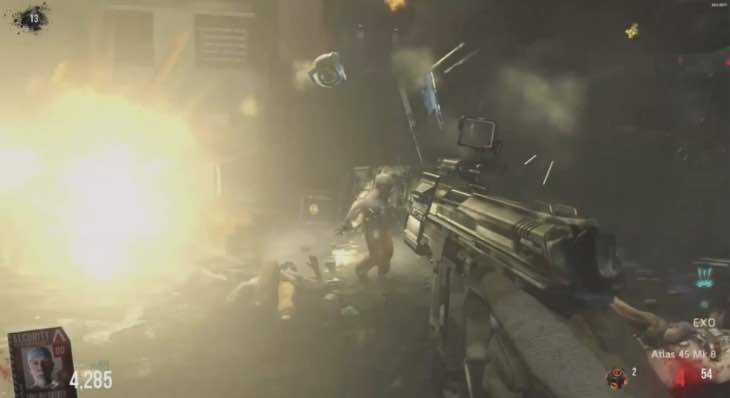 Pause the video below at the 7.50 mark and you’ll see the moment from the trailer which suggests that Pack a Punch will be available.

Look closely and you’ll see that in the first shot, the player is using the weapon called Atlas 45 Mk 2 on Round 5 and then in a later shot, he is using what looks to be a beefed up version with a scope called the Atlas 45 Mk 8 – on Round 13.

Obviously we could just have two different versions of the same model, without being Pack a Punched. However since there are plenty of other teasers located in the trailer, we have a feeling that Sledgehammer is hinting at something.

What do you think? Do you agree that Exo Zombies is actually looking very exciting for their first effort at the mode?