Is it really possible to shoot too high when adding better technology inside the iPhone 5, especially when we talk about the new iPhone connector rumored to release with the 6th generation device? Normally we would say improved features are always welcomed, but when it comes to the idea of Thunderbolt on an iPhone 5 some people think this would be overkill.

This iPhone news website states that the smaller hole seen in leaked iPhone 5 photos, which are not confirmed as authentic, could be a Thunderbolt connector rather than a microUSB port as first thought. While we would love to see the Thunderbolt port added to the iPhone 5 for that extra speed, it’s also true that most users would never need such a large speed boost.

In our opinion the iPhone 5 is likely to launch with a new connector to meet standards in Europe, and also to make a change that has been expected for some time, which would provide the iPhone with a common connector standard found on a massive range of phones. The idea of a Thunderbolt port also raises other problems with cost, power, and the need to transfer large file sizes by cable often enough.

The image below gives you an idea of how fast Thunderbolt is, and while faster is better in our books it is still hard to grasp this change coming to a phone considering Apple’s push towards iCloud. Apple has improved iOS to help users share and save files wirelessly with cloud computing, so to try and promote the connector again with more speed seems like a step backwards not forwards. 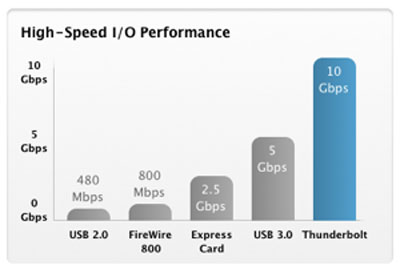 If Apple changed the iPhone 5 connector, what would you want to see in its place? Something faster like Thunderbolt or a well-known standard like microUSB? There will be a number of ways for Apple to make a new connector backwards compatible, and one way can be seen here.