Whenever Apple releases a new beta version of its Mac OS X, only developers are able to take the new software out for a test drive. It is around 4 months down the line when the public is able to get hold of it. However, Yosemite is a little different because the first million users who sign up today will get early access.

You can join the Mac OS X Beta Program now so that you can become part of the team that makes Yosemite better for the user. Once signed up you will be asked to offer feedback, and your comments will be taken into account when issuing new beta updates.

How to participate in the OS X Beta Program — First up we need to tell you that the public release of OS X Yosemite will be in the fall, more than likely late October as with Mavericks. You can get a pre-release of Yosemite by signing up HERE for free today by using your Apple ID, which I did, which you can see in the image below. 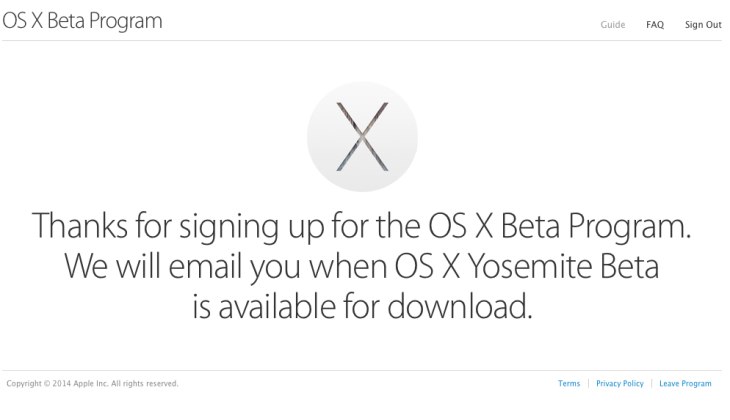 Once Apple makes the Mac OS X Yosemite beta software ready for download you will be sent a unique redemption code in order to take the new operating software for a spin.

However, you have to remember that because this will be a beta version there will be a few bugs, which could cause some issues for your MacBook Air, MacBook Pro, iMac and Mac Pro, and please remember to use the built-in Feedback Assistant application in order to address your problems.

We know that some of you will already be thinking of Mac OS X Yosemite compatibility, and we can tell you that Apple has made it clear that you need to have Mavericks installed in order to download and use Yosemite.