Ever since OS X Yosemite 10.10 was released it has been a nightmare for so many users, so much so that some of them looked for ways to go back to Mavericks until Apple could get on top of the problems. Thankfully, 10.10.1 update has now gone live and Apple says most of the bigger problems have now been resolved.

I have had first hand experience with the many problems with 10.10, as my Internet keeps going and so I have to keep turning WiFi on and off in order to be able to open webpages again, which happens about 10 times per day.

It is still to early to tell if this issues have been resolved, and I am just waiting to see if OS X Yosemite 10.10.1 will bring with it new problems. 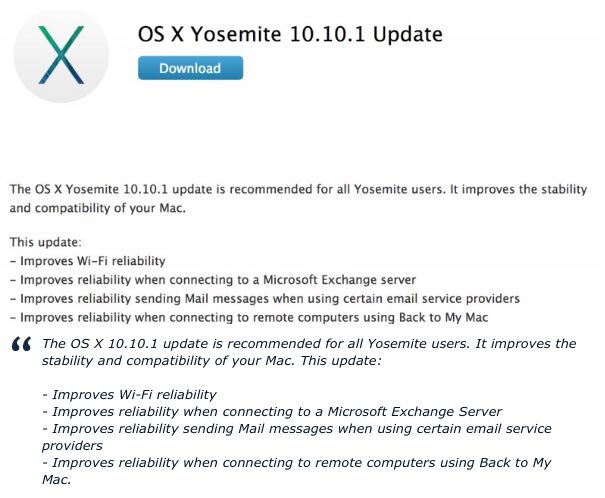 Some of the improvements with this latest update are improvements to WiFi for reliability, and to the issue where the mail app would not open, or when it was open the user was unable to send any messages.

These were just two of the biggest issues, although all of them can be seen in the image above.

As of writing this some of our readers have already started to report some issues have yet to be fixed, such as numbers being appended to the name of the computers name, such as “MacBook Pro (11)”. However, more worrying is how one reader said the WiFi problem is still there when airdrop is on, although we have to wonder if this is an isolated issue, seeing as though most other people have reported this to now be resolved?

Have you downloaded OS X Yosemite 10.10.1, if so what are your thoughts?