Apple has just seeded OS X El Capitan 10.11 beta 6 to developers with the build 15A244d release notes pointing to a few issues that still remain, or those problems that received a fix within the latest seed. As always, Apple point out that your system requirements need to meet an iMac from 2007 onwards and MacBooks from 2008.

You will also notice that photos libraries in OS X El Capitan Developer beta 6 are not backwards compatible, as such they won’t be opened anymore within this OS.

There’s Apple ID issues as well within the current beta that stop users signing into certain services when two-factor authentication is enabled. In many cases you will require a code that is generated and sent to the device, although when a single trusted device is selected then you need to generate codes in the iCloud Preference Pane. 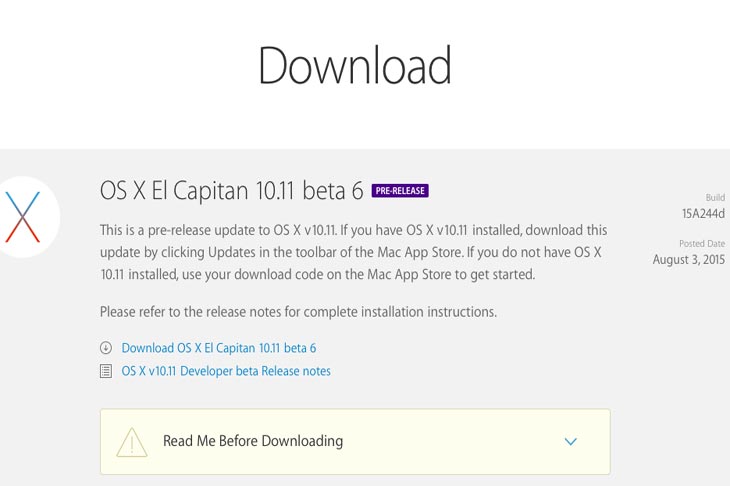 Aperture may start freezing and crash within OS X 10.11 beta 6, especially when you try to export original photos/videos, or after clicking “Delete Items” during importing from storage devices and memory cards. The unresponsive possibility has been documented within the OS X El Capitan beta 6 release notes and we hope this is fixed by public release within the next couple of months.

There’s plenty of other issues known within the latest developer seed that include systems failing after waking from sleep with USB devices connected. This has happened with past OS versions, and again it really needs a fix by the final preview build. We also note Logitech MX Master mouse problems with not being able to scroll, Safari’s tab audio feature not working with Flash Player 18.0.0.203, certain apps won’t allow the Share menu to create new Mail compose windows, and also Messages has problems creating screen sharing with this version.

Considering Apple is aware of these problems, you can expect all to be fixed by the OS X El Capitan 10.11 public release date. Of course, other problems will most likely still be there after release, so if you have any then share them in the comments.