In the online Vietnam expansion pack for Battlefield: Bad Company 2, there was a hidden fifth map, only to be unlocked when a target of 69 million team actions (Revives, Heals, Repairs etc.) is reached. The PC players very impressively reached the 69m target after only days of the Vietnam release. However, the PS3 and Xbox 360 players have not been able reach this target.

That’s ok though, as DICE have unlocked this extra map for everyone, as a sort of New Year present. The map is a remake of Operation Hastings from Battlefield Vietnam fame; the PC only 2004 game that many fans will tell you is the best Battlefield game so far. The remake theme of this map is similar to the recent VIP map pack 7, which featured fan-favorites harvest day and oasis from the first Bad Company. 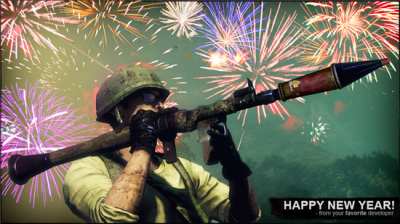 PC gamers are hoping their achievement will not go unnoticed, and DICE will gift them Onslaught mode, as only the PS3 and Xbox 360 players are able to play this great mode currently. Do you think DICE should give Onslaught mode to PC players? Be sure to let us know in the comments section below.

Information about BFBC2:
Battlefield Bad Company 2 was released on march 2nd in North America, and march 5th in Europe. It uses the Frostbite 1.5 engine, and has sold over 5 million units so far. It has been proclaimed as being better than Modern Warfare 2 and Black Ops.