When we attended the annual Eurogamer Expo last week we were stunned by just how much interest surrounded OnLive, well we have an OnLive game system to play with and on the whole we are impressed, but there are quite a few games which we would like to see arrive – luckily lots more are coming soon.

You can see the entire list of games currently available over at OnLive’s website, don’t get us wrong there is lots of choice, but a lot of today’s biggest titles are not available, so some gamers will find the list a little unexciting.

The most recent games to show up are Warhammer 40,000: Space Marine, Deus Ex: Human Revolution, DiRT 3, Red Faction: Armageddon, F.E.A.R. 3, Tropico 4, Homefront and Lara Croft and the Guardian of Light. These games are great for people who want to game but don’t want to splash out on a gaming PC, PS3 or Xbox 360 – but what about people who game already?

Currently there are lots of big franchises missing from OnLive marketplace, such as Call of Duty, Battlefield, Grand Theft Auto, Final Fantasy and Need for Speed, in fact a deal with EA alone would really push things forward. Well according to OnLiveInformer.com EA and OnLive have reached an agreement and loads of games are coming soon.

You can see a full list of confirmed games which are coming to here, these are the ones we are most excited about: Assassin’s Creed Revelations, Bulletstorm, Civilization V, Driver: San Francisco, F1 2011, Football Manager 2012, LEGO Harry Potter: Years 5-7, Limbo, MLB 2K11, NBA 2K12, Roller Coaster Tycoon 3, Saints Row the Third (you can pre-order this game already) and Super Street Fighter 4: Arcade Edition. As you can see there are lots of big titles coming! 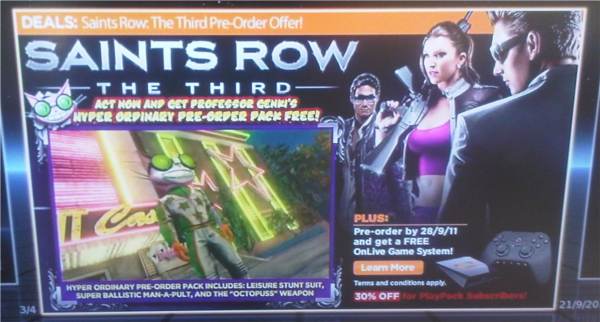 If things continue to grow for OnLive we can’t wait to see the list of titles in six months time, with its user base growing each day we really think this could be a cheap alternative to expensive games consoles and gaming PC hardware.