The Samsung Galaxy S5 and the HTC One M8 are two powerhouse, high-end smartphones going at it with each other at the moment, but we must not forget about the mid-range devices with their lower costs. One of the more popular budget-friendly handsets at the moment is the OnePlus One, and we believe that an ideal device to pit it against is the Nexus 5.

We know that the OnePlus One has been pitted against the latest and greatest Android devices currently on the market, but this seems unfair considering they cater for different markets, and so the Nexus 5 does seem like the better fit.

OnePlus One vs. Nexus 5 review — Both these handsets punch above their weight when you consider their prices because while they are for those of you with less disposal income, they are both fantastic phones.

Once we started these phones up we know they were running the same version of Android, which is 4.4.2 KitKat, although the Nexus 5 makes use of stock Android and OnePlus One has CyanogenMod 11S to help keep things running just the way it wants.

We know that the Nexus 5 will run a little smoother and offer more free space because of the lack of bloatware, although the OnePlus One is not as heavy as the Galaxy S5, or S4 for that matter. It is pretty hard to pick a winner in the software department because while naked is most likely better, it is often nice just to have a helping hand with a custom UI. 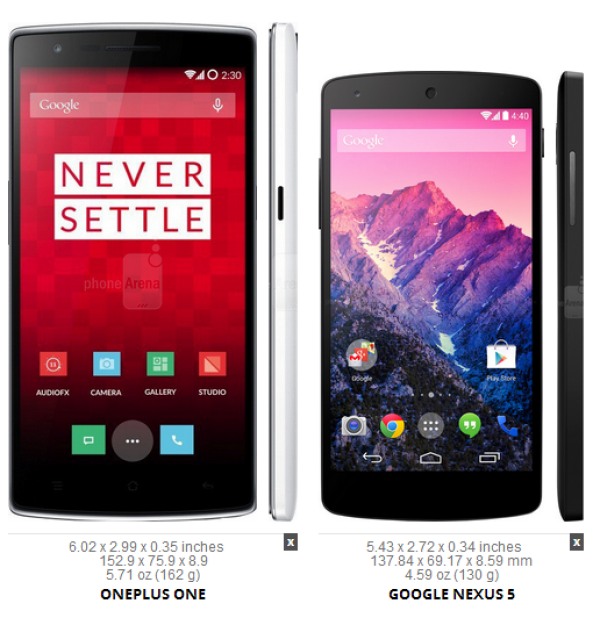 Design wise neither wins here because they are not very attractive, so nothing like the HTC One M8 in that respect. This is because of the material they are made from, but then again, considering the prices, what would you expect?

That is not the only thing letting the Nexus 5 down, as the OnePlus One sports 3GB or RAM and an Adreno 330 GPU, whereas the Nexus handset may have the same GPU, but has 2GB of RAM instead. 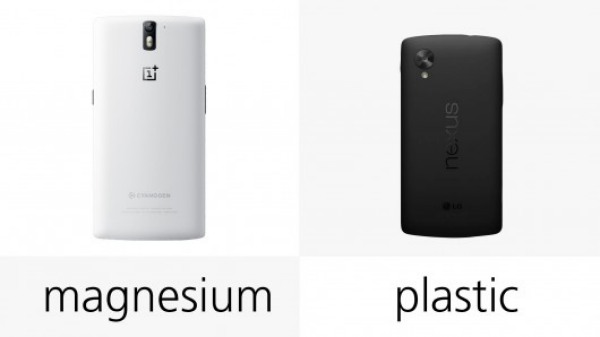 A comparison of the Nexus 5 and OnePlus One cameras supports what we already thought, and that is while the former has improved thanks to an update, it is still no match for the latter. It is a bit like David and Goliath because the Nexus 5 only has an 8-megapixel snapper and the OnePlus One has a 13-megapixel camera at the rear along with a dual-LED flash.

The battery for the OnePlus One should be able to outperform that of the Nexus 5 because you have 3100mAh compared to 2300mAh, although with the latter being a naked version of Android, there is a good chance it will punch above its weight.

We could go over some of the other OnePlus One specs compared to the Nexus 5, but we thought you would rather watch a couple of videos instead. However, what many of you will want to know is the OnePlus One price, which we can tell you is $299 for the 16GB model and $349 for the 32GB model, compared to $350 for the 16GB Nexus 5.

Which of the two would you choose because it is not as easy as you would think?