It’s now been confirmed that OnePlus will announce the new OnePlus 3 handset at some stage today, which is said to be called the 3T – makes us think of Michael Jackson’s nephews. This new model will be more powerful and one of its most important specs has also been confirmed by Qualcomm, and that is a Snapdragon 821 processor. 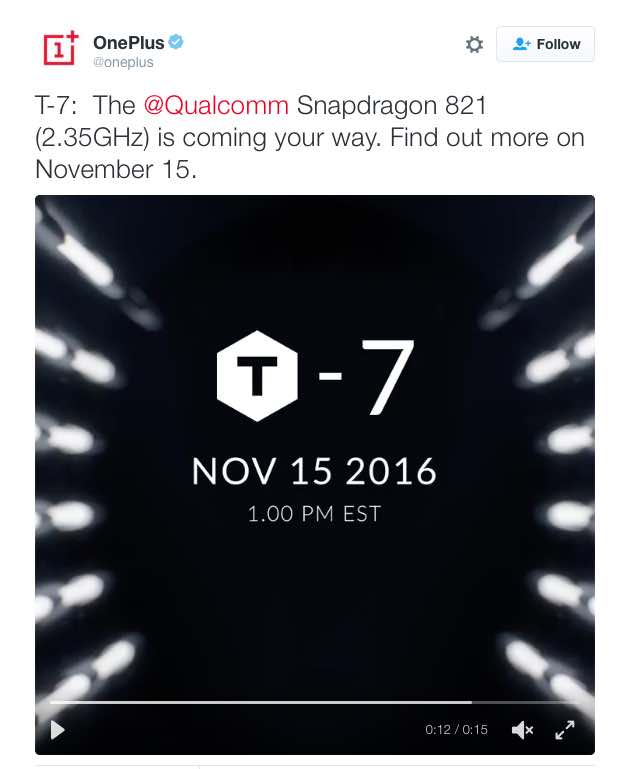 The OnePlus 3T availability might be a little constrained at first, with the first shipments more than likely being in China first. However, we do hope that OnePlus will reveal its 3T distribution plans to other parts of the world later today during its release announcement.

As for the time of its launch, this will be 1PM EST, although OnePlus did not really share too much on Twitter, although they did tease us with a video with a T logo taking the main focus.

Looking at the image it does not give too much away, and is more a stylised representation rather than the real thing, and so does add some confusion.

In terms of what we know so far of its specs, it’s likely to have a Sony IMX398 camera sensor, a 3,300mAh battery, so a boost over the current model and also the possibility of 128GB of onboard storage. In terms of price, it is expected to cost around $80 more than the OnePlus 3.