The Samsung Galaxy Nexus is now official! Google and Samsung are yet to show off the device on stage since the event is just about to get started, but thanks to promo materials handed out to attendees at the event, we now know what kind of hardware specs the beastly Galaxy Nexus will possess.

And it definitely is a beast. The Galaxy Nexus will be sporting a 4.65-inch HD Super AMOLED Screen with 720p resolution along with a 1.2GHz dual-core processor, which although hasn’t been made official yet will likely be a TI OMAP4460.

Other specs include a 5 megapixel camera with LED flash, 1GB of RAM, 4G LTE and HSPA+ connectivity, NFC chip, Bluetooth 3.0, USB 2.0 and a 1,750 mAh li-ion battery which should provide decent battery life.

As for the new features, it looks like Android 4.0 will bring an exciting face unlock feature to the Galaxy Nexus, using face recognition technology to unlock your device without the need of any physical input from the user. Another new feature confirmed is Android Beam, Google’s new ICS feature which will use NFC to allow users to share media and other data just by touching two phones together.

Those are the official specs confirmed so far, we’ll update this as we find out more since the event is ongoing as we speak. The initial specs are impressive on first glance, but some consumers may be disappointed in the fact that the Galaxy Nexus features a dual-core 1.2Ghz processor only, not the dual-core 1.5Ghz Exynos processor that many had hoped to see.

Also, although megapixel count doesn’t always tell the story of picture quality, the fact that the Galaxy Nexus only comes with a 5MP camera may be seen as a huge disappointment by those looking to shoot pictures regularly on the new device.

Another potential bombshell is the fact that the Galaxy Nexus may not come with a memory card slot, meaning that users may have to settle with a 16GB or 32GB handset only – no extra memory.

We’ll be finding out a lot more about Ice Cream Sandwich and the Galaxy Nexus after Google’s event. For now, give us your initial impressions of the hardware specs – are you impressed or a bit disappointed? Did you expect a dual-core 1.5Ghz chip? 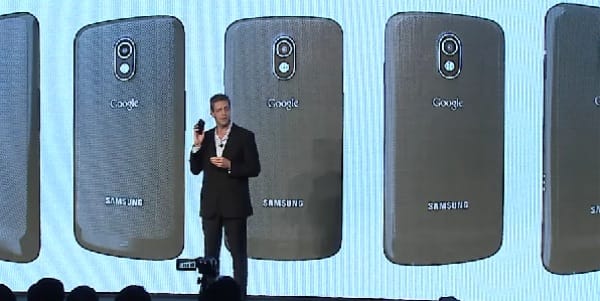