For those of you who have been using Microsoft Office for iPad since the start have been waiting in anticipation as to when Microsoft will bring some much-needed updates, and yesterday was that day. The software giant had already brought a few updates to the table shortly after the suite was released, but nothing as extensive as this latest one.

Office for iPad version 1.1 brings new features to – Excel, PowerPoint and Word, well 18 in total, although we expected nothing less seeing as though this is really its first major update.

The full list of changes can be seen below, but we will point out some of those new Office for iPad features that stand out to us. Take Microsoft Excel for iPad 1.1, this has 7 new features in all, one of which now allows you to send PDFs. Having the ability to send Excel files as a PDF is a big deal for users because it was one of the most asked to be added. External keyboard support, and improved print options have also been added. 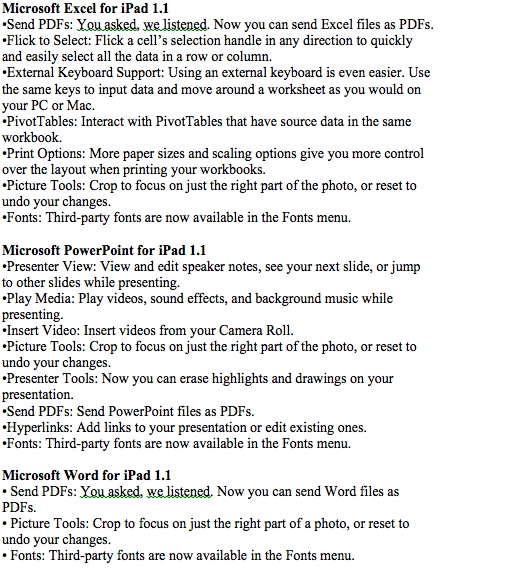 Next we have PowerPoint for iPad 1.1, which has had 7 new features added, the first of which is presenter view, which allows you to view and edit speaker notes. You can now play media, such as videos and background music during a presentation. Third-party fonts are also available in the new update.

Finally, we have Microsoft Word for iPad 1.1, which has the least amount of updates, 3 in all. You can also send PDFs, picture tools now include the ability to crop the part of a picture you want, as well as undoing any changes made. Just like PowerPoint, Word also supports third-party fonts.

You have to admit, this is a pretty decent update, but what features do you feel Microsoft has left out?