The NVIDIA Shield Tablet is preparing to be released today in the US. Due to its powerful specs and console-like capabilities, we are already seeing it compared to the PS4 and Xbox One, with gamers wanting to know if NVIDIA’s new tablet can actually convince gamers that their tablet can offer a similar experience to Sony and Microsoft.

For a reminder of what this tablet is capable of, let’s remind you of the key NVIDIA Shield tablet specs. It features an 8-inch full HD 1920×1200 display screen, with NVIDIA’s Tegra K1 192 core Kepler GPU which offers a 2.2 GHz ARM Cortex A15 CPU with 2GB RAM – full tech specs here.

On top of that there’s stereo speakers with a separate bass port and a built-in microphone. This tablet is also fully 4K Ultra-HD Ready and offers a 5MP camera on the rear and the front.

Below is an infographic, showing you the functions that the NVIDIA Shield Tablet can transform into. There’s different modes for different occasions, but the most useful of which is the console mode. 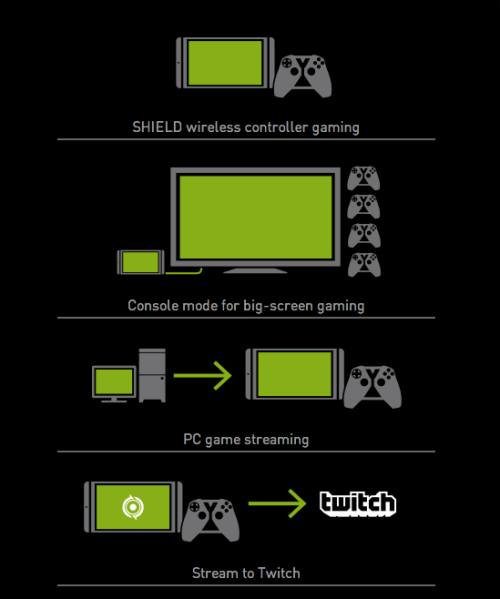 This means that you’ll be able to stream PC games such as Titanfall straight through to the TV as long as you have the PC hardware to support it. If you don’t know, you’ll also have full access to the entire Google Play library, to play graphic intensive games such as Modern Combat 5 straight on the TV.

While the NVIDIA Shield Tablet won’t match the PS4 and Xbox One in terms of big name titles, it could match both systems in hardware potential thanks to the NVIDIA Tegra K1 chip.

With a price set at $299 in the US, it’s also cheaper than the PS4 and Xbox One, so it may be worth thinking about if you are looking for the best way to enjoy mobile gaming on a big screen.

Any Android app is also supported remember, Netflix, Skype you name it. PC gaming on titles such as Titanfall running through the tablet with minimum lag in the living room has to be impressive either way you look at it.

The question is, are you interested in the NVIDIA Shield Tablet enough to justify a purchase over the PS4 or Xbox One? Give us your thoughts on this below with regards to how you feel they compare.