Forget all of these amateur dual-core tablets that we’ve been telling you about recently, a new competitor has just unveiled their entrant which will be arriving in 2012 – prepare to be blown away, once again.

NVIDIA has just finished announcing their new tablet project, which has been codenamed ‘Kal-El’. It’s in the early stages of development at the moment, but the company has confirmed that it will be running on Google Android, with a Quad Core processor.

Yeah, you heard it right, four cores simultaneously working together to deliver some serious multimedia goodness to users, not to mention becoming the first company in the world to deliver a quad core tablet to market.

According to NVIDIA their quad core processors will be able to deliver performance quality, which is around five times GREATER than that seen in the current dual-core Tegra 2 processors, which are now starting to become mainstream in tablets and smartphones. Furthermore, the tablet will be able to produce longer battery life, since the device will be able to distribute work loads between the four cores evenly, meaning that no cores are over used – resulting in a much better performance for the user.

With four cores at it’s disposal, it also means that gaming won’t be a problem and it should mean that NVIDIA’s tablet will be able to churn out some of the latest 3D games with ease – we’re predicting that NVIDIA will give a demonstration of this soon. 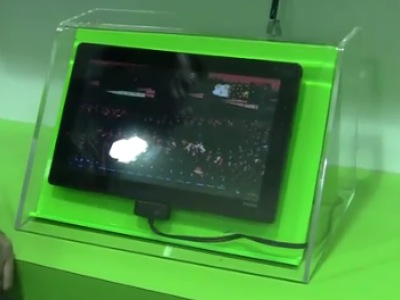 The only downside to the news, is that we’ll have to wait until 2012 at the least, for this tablet to hit the market. Hopefully the company have more tech demos planned though, as we’d really love to see more of this beast in action. For now though, enjoy the video below courtesy of Phandroid.

What are your thoughts on this quad core behemoth? Imagine being able to play a game of Crysis with optimal settings on the train, with a wireless mouse on the go – pretty mouthwatering stuff isn’t it?