There always seems to be a constant stream of new laptops and notebooks being released, whether it’s from the likes of Apple, Dell, Sony, or even HP there is a lot of choice available. HP has recently announced the new 11-inch Pavilion dm1z which has the latest AMD Fusion technology.

Notebook review have tested the HP, and said at first glance it could mistaken with many netbooks the company has offered before, but has a lot more to offer than those lower powered devices. Build quality is pretty good, but the one thing which was noted is the middle of the lid which can bend inward with firm pressure. There is also the lack of any expansion bay on the bottom of the HP; instead you will have to remove the battery to gain access to the RAM, hard drive and wireless cards.

Connection wise you will find three USB 2.0 ports, VGA, Gigabit LAN, HDMI-out, and an audio jack for headsets. There is a slot for a SDGC card to expand available storage or upload images from your camera. Performance wise the HP was found to be a pretty capable machine even when tested with gaming. 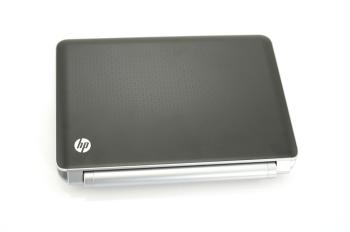 TechReview Source have also reviewed the HP Pavilion dm1z and mentioned the CoolSense technology which helps to reduce heat buildup, this is achieved with the cooling vents being at the back instead of the bottom. It was found that the keyboard is well designed and comfortable to use. With a six cell battery you can expect to see seven to eight hours of battery life. With prices starting from around $449.99 direct from HP, you get quite a lot for your money.

The specs of the model which they tested was 3GB of DDR3 memory, 320GB 7200RPM hard drive, AMD dual-core E-350 CPU, and graphics are an AMD Radeon HD 6310M. No optical drive is supplied but HP has the choice of two external drives, including one Blu-ray and DVD+/-RW combo drive.