Barnes & Noble are kicking off the Holiday shopping season with the announcement of a new device, the NOOK Tablet 7, which will be released on November 25, 2016 – so Black Friday. 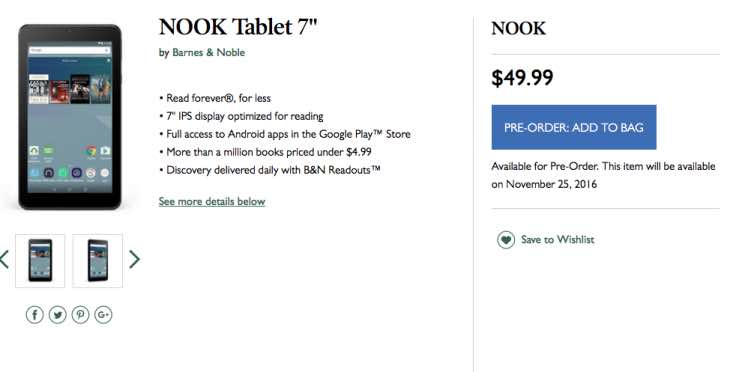 The thing is, while this new tablet from Barnes & Noble is cheaper than the baseline Amazon Kindle by $30, the retail price of $50 means it’s the same price as the Amazon Fire.

Like we said it will become available on Black Friday, so it will be interesting to see how well it sells, especially as we presume Amazon will offer some sort of incentives so you go to purchase their models instead.

Having said that, the NOOK Tablet 7 with its price of $50 has no gimmicks, as that’s how much you will pay from day one. In terms of specs, you get a 7-inch IPS display with 8GB of onboard storage, which can be increased up to 128GB with a microSD card, and also up to 7 hours of battery life.

You can already pre-order one now, and it will be shipped to one once available.