The tablet Cyber Monady deals are really going a bit crazy this year it seems. While we have seen plenty of lesser known tablet brands appear with massive discounts, we’ve also spotted that some of the popular devices are also going with small discounts.

One of these is the Nook HD+ 9-inch 32GB tablet, which you can now pick up over at Target for just $150 – a $20 discount on their usual $170 listing. That is a very cheap price you have to say, especially for a tablet that provides suitable performance and hardware specs.

Both tablets also run on a customized version of Android, although it has to be said that Nook HD+ will offer an OS that is more akin to that of traditional Android, whereas the Kindle Fire HD has been heavily customized with Amazon’s own touch – not that this is a bad thing of course. 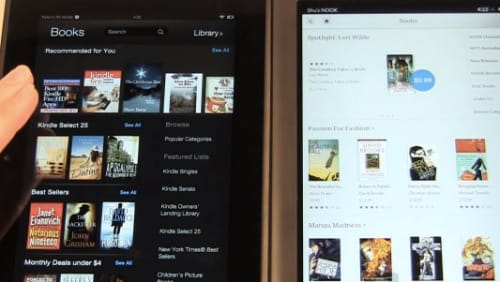 With both devices going for low prices during the December sales, we have picked out an in-depth review with the Nook HD+ Vs Kindle Fire HD, lasting 30 minutes. If you have the time, you can watch the whole thing and really get an idea on which tablet looks the better choice for you.

Both have similar specs and pricing, so let us know which device you think has the edge. Is it really about brand-preference for you when choosing a tablet or not?