Back in February we told you that Nokia were scrapping Symbian OS in favor of Windows Phone 7, well today we have some photos of a Nokia smartphone running WP7 to show you, this device is apparently codenamed ‘Sea Ray’.

We have embedded a couple of photos further down this post which show the Sea Ray, these were taken during a recent Nokia presentation where we were introduced to this impressive piece of kit, at first glance you will think that it looks a lot like the black Nokia N9 (which runs MeeGo), but it’s not. In terms of form-factor and size it is pretty similar, however there are the 3 WP7 buttons on the front and when compared to the N9 there is an additional button on the side, we don’t yet know what this button does.

The Sea Ray features a similar display to the N9 and we are told that it is protected by Gorilla glass, if you turn the smartphone over and look at the rear you will see an 8 megapixel camera which features Carl Zeiss optics (the same as the N9) and a pillow-shaped back, you will also notice the the Sea Ray is pretty thin.

If you head over to Engadget you can watch a 21 minute video where Nokia give us our first proper glimpse at the Nokia Sea Ray, sadly we don’t know when it will arrive, or what we it will be called upon release, however we can confirm that it is currently fully-functional and will run Windows Phone 7 Mango. We know that Mango will arrive sometime this fall, therefore it could well mean that this smartphone will arrive at a similar time, either way Nokia were keen to promote the fact that Mango will bring 500 new features and additional capabilities and Nokia say that the device and OS combined will be very people centric. 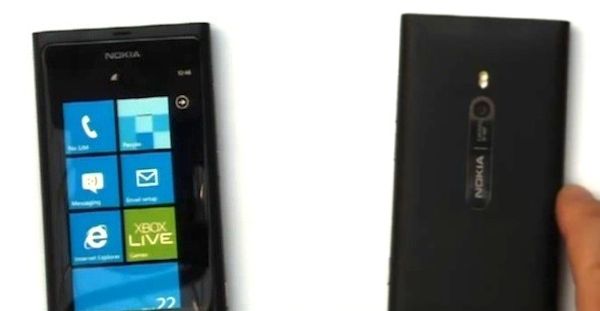 We watched the video and were happy to see the Sea Ray running smoothly and showing off its Xbox Live and Office functionality, one neat feature we got to see was People hub which now features face recognition.

Just as we were coming to terms with seeing the first-ever Nokia WP7 handset we then stumbled upon this Engadget post, this shows a Nokia handset running Google Android, however we are not sure whether the photos are legitimate or not, check them out for yourself and let us know your thoughts on their legitimacy in the comments section below, also let us know whether you are interested in the Sea Ray.