Recent years has seen Nokia’s market share in the smartphone market dwindling fast, with handsets failing to impress most consumers. Meanwhile the company is looking to turn its flagging fortunes around as the Nokia N9 MeeGo release is confirmed via a countdown clock, but is it too little too late?

The company is looking to the MeeGo and Windows Phone 7 operating systems to give its smartphone business the shot in the arm it needs. Now the Finnish company has launched a countdown clock on its Swedish N9 page, which was found by the team over at Electronista. There have already been rumors the device will be available later next month, and now with the new clock it is set for September 23.

At the moment it’s not clear what countries and carriers will be getting the device on that date, but Nokia have hinted before the device won’t be reaching the shores of the US. The handset would support the likes of AT&T and T-Mobile though, and also most carriers in Canada.

The Nokia handset is coming with 3.9-inch curved AMOLED display, 1GHz single core TI OMAP processor, 1GB of RAM, and either 64GB or 16GB of storage. As with many Nokia handsets the device comes sporting a great camera. The unit has an 8-megapixel shooter with the usual Carl Zeiss lens, and two LED flash units. It is rumored to be a quicker camera to that which is found on the Samsung Galaxy S II enabling shots to be taken in under three seconds.

Pricing is not yet known but it is rumored to be available for around £600 in the UK SIM free. This new handset could yet prove to be hugely successful for the company, but whether it’s enough to get consumers picking one up over an Android or iPhone handset remains to be seen. Some Nokia fans may be waiting to see what the first Windows Phone 7 handsets might bring.

Are you considering the Nokia N9? 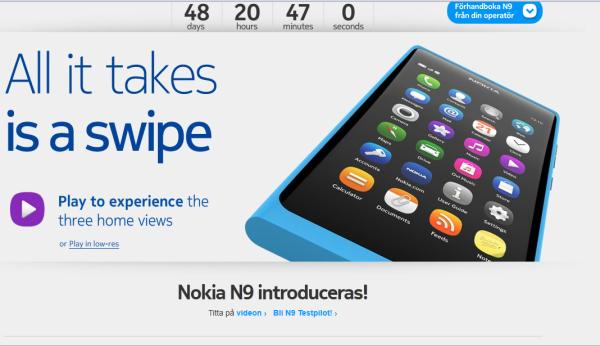