If you needed a further incentive to pick up the Nokia Lumia 800 in the US or in Europe if you don’t have one already, this could possibly seal the deal for you. It has been revealed that Nokia are commissioning a very limited edition Batman: The Dark Knight Rises version of the device that comes equipped with a Batman logo etched on the back.

Just like most things Batman related today, it looks very slick too. The Nokia Lumia 800 has traditionally been shown off in that rather colorful blue casing in recent outings, but this limited edition Batman version comes with a black version of the device, with the batman logo thought to be laser-etched into the device in a devilishly cool darker shade of black.

Nokia has made this semi-official by posting a few pictures and a very brief unboxing video on Twitter, which was picked up by the guys over at Slashgear. If you watch the video, you’ll see that the limited editions are packaged in a Batman-themed box, and aside from the logo featured on the back of the device, you’ll also get a few goodies in the form of Batman wallpapers, and a few Batman Live tiles as part of the Windows Phone 7.5 interface that features on the Lumia 800.

Here’s the sad part of all this though – there are only apparently 40 versions to be made, making this limited edition version extremely hard to obtain. You can bet that various celebrities will be interested in picking up a few of the forty handsets, but the ones that do creep out to the public will probably be seen on online marketplaces such as Ebay for crazy prices.

Let’s hope that Nokia build some more of these as we predict they will become very popular indeed. One slightly disappointing aspect though – if Nokia had made that Batman logo light up in some form or another, this thing would literally sell through the roof. Still though, it’s nice to see regardless. Batman: The Dark Knight Rises hits cinemas next year.

Would you be interested in picking one of these up? Perhaps more importantly – Do you have silly money to spend to get one? 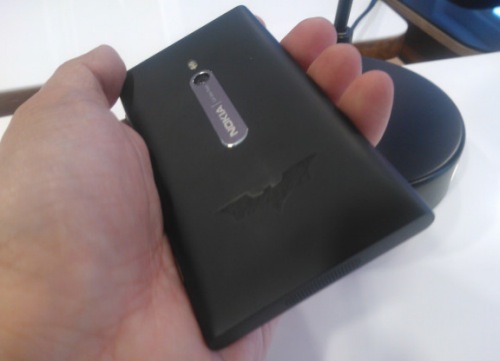