Nokia has begun its fight back as it tries to turn the tide and stop falling sales of its smartphones, and have announced its first range of Windows Phone 7 handsets. Today at its Nokia World event in London the Lumia 710 and 800 Windows Phones get official with specs for both devices.

The Nokia Lumia 800 aka Sea Ray and the Lumia 710 aka Sabre have finally been revealed by the manufacturer. Both the handsets will be coming with a nice quick 1.4GHz single-core Snapdragon processors, with 512MB of RAM. Electronista are reporting the Lumia 800 looks similar to the Nokia N9, and comes with 16GB of storage and 25GB of free SkyDrive space.

The display is a 3.9-inch ClearBlack AMOLED offering, while the Lumia 710 has a slightly smaller 3.7-inch screen. The 710 also has 8GB of storage with both handsets running Windows Phone 7.5 Mango. Using the Windows Phone OS is a move away from Symbian, which has fallen behind the Android and iOS platforms.

Regarding the release dates for the handsets it has been announced the Lumia 800 will be available next month in the UK, France, Germany, The Netherlands, Italy, and Spain. Hong Kong, India, Russia, Singapore, and Taiwan should get the device by the end of the year. It is already available for preorder on the Nokia website for the equivalent of $585.

The Lumia 710 will be available in Hong Kong, India, Russia, Singapore, and Taiwan by the end of 2011 for around $515. Other markets are set to get the device in 2012. Do you like the look of the new Nokia handsets? 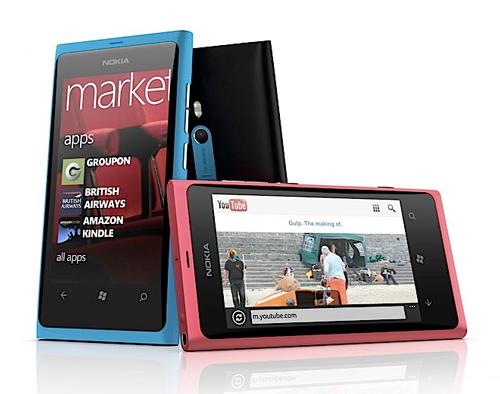