The Nokia Lumia 620 has been revealed today with the full technical specs to show a handset that is directed towards our younger audience, or at the very least those on a budget. The Lumia 620 is Nokia’s best-priced handset that includes adequate specs for the money, which provides a compact design to support the higher end Lumia 820 and 920.

Nokia explains that the “youthful appeal” of the Lumia 620 partnered with Windows Phone 8 software will aim at a very specific user, and Nokia suggest the Lumia 620 price is ideal for budget conscious buyers. The price point has been set at $249 with a variety of colors on offer, which include black, white, cyan, yellow, magenta, orange, and lime green. Exchangeable shells allow the user to easily change the phones style to suit different tastes.

Nokia still focus on making the Lumia 620 a great camera phone with a five-megapixel shooter, which features exclusive camera lenses just like the Nokia Lumia 820 and 920. The Lumia 620 will see a release date in January 2013 for Asia, and then this will be followed up with a launch in the Middle East and Europe before heading to the US. Other notable features include a 1GHz dual-core Snapdragon S4 Plus processor, 3.8-inch TFT WVGA 800×480 display, HD video capture at 720p and 30fps, 512MB RAM, and 8GB of storage that can be expanded up to 64GB with a micro SD card.

Would you consider the Nokia Lumia 620 at a price of $249, or do you find the specs lacking? You can see the technical details below and more information on Nokia’s official website. You might want to see the Nexus 4 and Nokia Lumia 920 in a review of their HD recording abilities in this article. 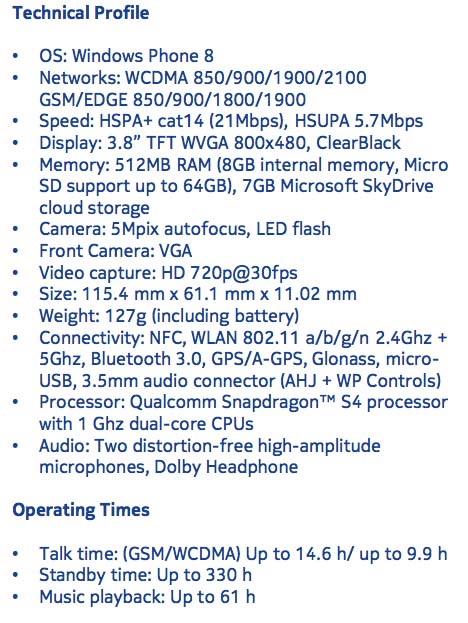