How are you enjoying your lovely new Nokia Lumia 2520 tablet at the moment? Based on the reviews that have now gone live for the US version of the device, it looks like Nokia has really outdone themselves with a great Windows 8.1 RT tablet that can compete with the very best.

The only problem though that we keep hearing, is that there are not enough apps for users to download from the Windows store. This has always been a problem for Microsoft and consumers who use Windows 8.1, but hopefully they are planning to improve this situation as we kick off 2014.

After all, consumers will not want a lack of software to take away the fact that the Lumia 2520 remains an excellent option on the market. The hardware specs out of the box are fantastic, but we see on the store that the app selection remains pretty thin.

The usual suspects are there with downloads available for the likes of Netflix, Skype, Facebook and Twitter. However some of the more adventurous selections are not available yet, especially an iTunes app which is due to Windows 8.1 RT not being able to run full Windows programs. 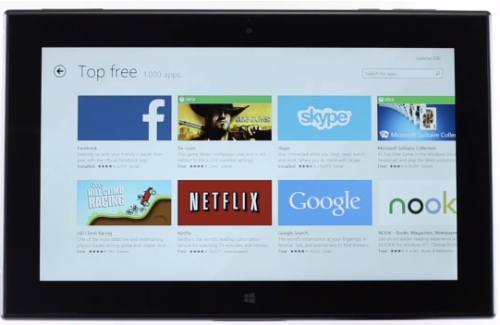 That also means that apps such as Adobe Photoshop are missing, while there isn’t even basic apps such as Temple Run 2 or Dropbox which you’ll find with no problems on other tablets.

Those are just a few examples, but we’re sure you are already noticing that other usual apps are missing. Do you have a Lumia 2520 tablet already? If so, let us know what apps you are expecting to see in a 2014 update.