The Nokia Lumia 1020 vs. Lumia 920 comparison had to happen following the latest release and thanks to some quick hands-on reviews at recent events. Today, we have two videos for you giving some insight from a hands-on and a look at the main Nokia Lumia 1020 specs and how they compare to those on the Lumia 920.

You can see both smartphones side-by-side in the video found above this article and while it only lasts for just over 2 minutes, you will get a good look at the Nokia Lumia 920 vs. 1020 external design.

Our second featured video is a lot longer and can be found below this article. It runs for just over 7 minutes and was taken during an event in New York. The quick Nokia Lumia 1020 vs. Lumia 920 comparison shows how both phones compare from the outside, and also takes a close look at both cameras and how the specs compare.

When it comes to cameras the difference in megapixels is massive. The Nokia Lumia 920 features an 8MP camera with Carl Zeiss and the new Lumia 1020 cameras specs increase to 41MP with PureView Zeiss.

There’s some debate over the need for SD card expansion with high megapixels, so some users will want as much storage as possible with the Nokia Lumia 1020 to save problems with space later on if the handset isn’t used smartly. Do you think an SD card should have been included on both smartphones?

You can see the specs compared in the image below, although this covers the main specification and not the full tech specs but this should be enough for most of our readers to understand the key differences. Do you prefer the Nokia Lumia 1020 or Lumia 920? 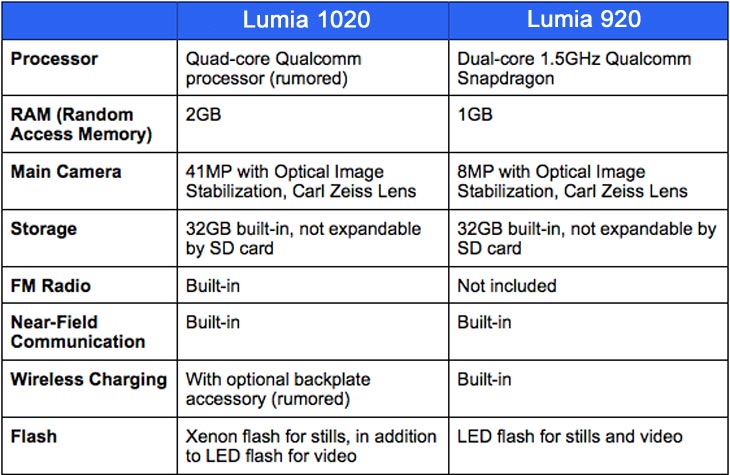