Nokia showcased the Nokia Lumia 1020 towards the end of the last week at a New York event, so naturally consumers want to know everything about this smartphone and how it stacks up to some of the most popular phones right now. Today, we wanted to give our readers a quick specs comparison of Nokia’s Lumia 1020 vs. Samsung Galaxy S4, Apple Phone 5 and HTC One.

You can see the bright looking Nokia Lumia 1020 above in yellow and clearly marked on the front is the 41-megapixel camera. There is no doubt Nokia want to promote this feature in everyway possible and with a growing number of people dropping their digital cameras in favor of a camera phone, it seems to be a good move by Nokia.

The Nokia Lumia 1020 specs can be seen in the image below and they are side-by-side with the iPhone 5, Galaxy S4 and HTC One. The latter smartphone has been growing in popularity every week, and we have also seen a number of PR readers defend this phones success and they also show the type of loyalty Apple users deliver. 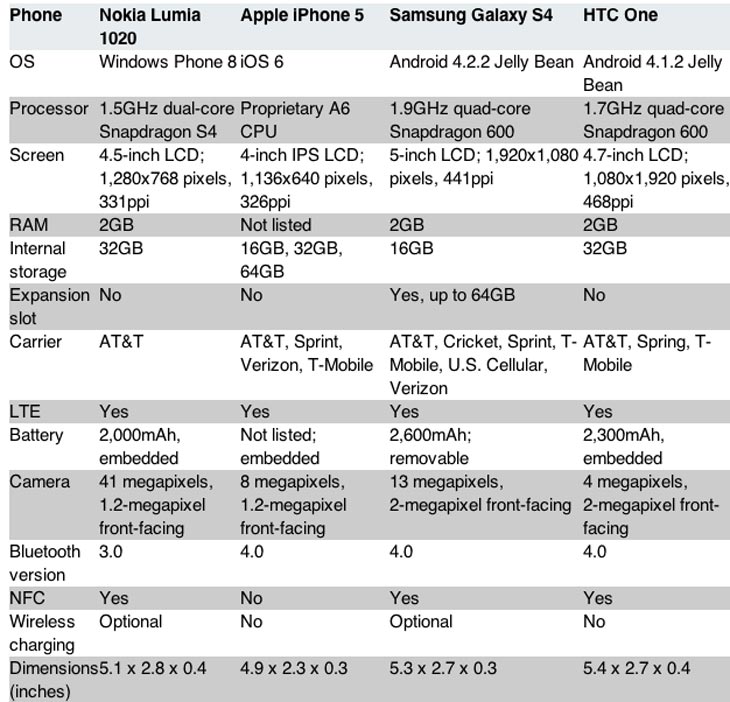 Take a look at the specs above and let us know which smartphone looks best on paper in your opinion? Apple’s iPhone is one of the older handsets from the bunch and we look forward to seeing how an iPhone 5S or 6 compares in a couple of months time. Feel free to take a look at our earlier article that featured a video comparing Nokia’s Lumia 1020 vs. Lumia 920.