Those of you waiting to get your hands on the Nokia E7 smartphone were delivered a disappointing blow last year, when it was announced that the release date had been delayed. However, there now appears to be some good news, as the price and release month have now been revealed.

According to a recent engadget.com article by Vlad Savov, Nokia’s Finnish store has just put the E7 handset up for pre-order, with a price tag of â‚¬599. They’ve also revealed that the all-business device is expected to arrive sometime in February of this year. 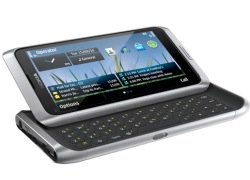 The expected arrival time coincides with previous reports, which suggested that the E7 would be arriving early 2011. As noted over on the Finnish website here, the E7 smartphone features a 4-inch touchscreen, business and messaging apps, a full QWERTY keyboard and an 8MP camera with HD video recording.

You can view a hands-on video — courtesy of the guys over at Engadget — through a previous article here. As Jamie Pert noted, the brief video shows us that the E7 will feature pinch-to-zoom functionality and 3 different customizable home screens.