For a long time now consumers have been less than impressed with Symbian, now we are hearing that Nokia are beginning to understand why this OS just doesn’t cut it when it comes to high-end smartphones, it looks like Nokia will concentrate on Windows Phone 7 and MeeGo instead.

This was announced earlier today at an event held by Nokia, by 2012 it is thought that Symbian will be “wholly consumed” by Windows Phone 7, it looks like Nokia will still work on MeeGo, however WP7 will be their main priority.

Below we have embedded an image (taken from Engadget) which shows how Nokia’s research and development plans, as you can see it looks like there will be no sign of Symbian in 2012, instead they will be investing most of their time and money into Microsoft’s recently released mobile OS. 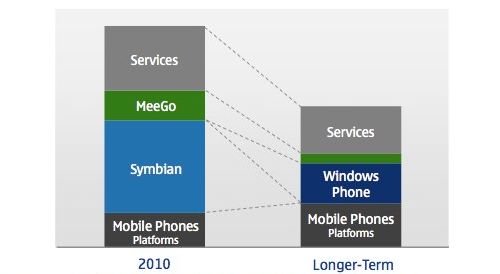 The news that Symbian was being scrapped will obviously have a massive affect on OS market share and the Symbian developers, according to another recent Engadget post thousands of employees at Nokia’s Tampere office walked out today, obviously it is frustrating for software engineers who have been working on the OS for years, however if Nokia feel the company needs a change of direction they are probably right.

Last year Nokia released the Nokia N8, this was Nokia’s first-ever Symbian^3 smartphone, therefore hopes were high, however it didn’t impact the market as much as they would have hoped despite its 12 megapixel camera and other impressive technical specs, many experts and smartphone enthusiasts feel that if the N8 ran Android it would have been a great success, perhaps Nokia agree and have now “seen the light”.

Why Nokia chose Windows Phone 7 over Android is a mystery, however I think you will agree that Windows Phone 7 is far superior to Symbian^3 and a huge step in the right direction.. or do you?

Did you buy the Nokia N8? If so, did Symbian^3 frustrate you?