The 2012 Mobile World Congress is well under way now over in Barcelona, Spain, and we are now being treated to some great looking handsets already. Nokia really means business this year as besides their push into the Windows Phone platform the company has just announced the Nokia 808 PureView, which has a camera that will makes some go weak at the knees.

Nokia has revealed its new flagship Symbian smartphone that comes with a 41-meagapixel camera, and no that is not a typo. The company has achieved this by combining Carl Zeiss optics with new technology that Nokia has developed that over samples pixels. According to an article on Mashable the PureView technology will be coming to other Nokia handsets in the future.

Of course the higher the pixel count doesn’t always mean the best quality images, so the device will have to be seen in action in the wild to establish the cameras quality. The new smartphone also has a new feature called Rich Recording, which will allow owners to record quality audio up to 140 decibels according to Nokia.

Other features of the device aren’t exactly going to set the world on fire, as it uses a 1.3 GHz single-core processor. The screen is a 4-inch AMOLED ClearBlack touchscreen that will have Corning Gorilla Glass, and the 808 PureView comes packing only 512 MB of RAM with 16 GB of onboard storage, which is expandable up to 48GB via microSD. It will also feature Dolby Headphone technology along with Dolby Digital Plus for 5.1 surround playback.

The Nokia 808 PureView has been promised to be hitting the Euro Zone in May priced at around 450 Euros. Update: Below you can see an image of the camera sensor unit for the 808 PureView that Nokia has shared on Twitter, but it shows any device using this tech will not allow for a thin handset. 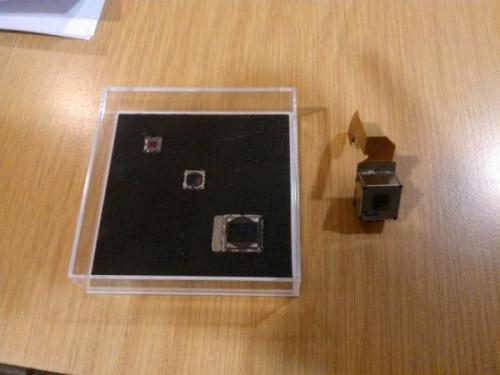