For those clinging on to the hope that the extension to the Star Wars Battlefront beta would imply that new maps would be added, we have some bad news to deliver.

The Community Manager for Battlefront has just said on Twitter that there will not be any new content added to the beta, so what you see now is what you are going to be getting until launch.

There had been strong rumors that the Endor map would be added into the beta in a surprise update, after multiple rumors surfaced that some player’s games had glitched and allowed them to access the Endor loading screen. 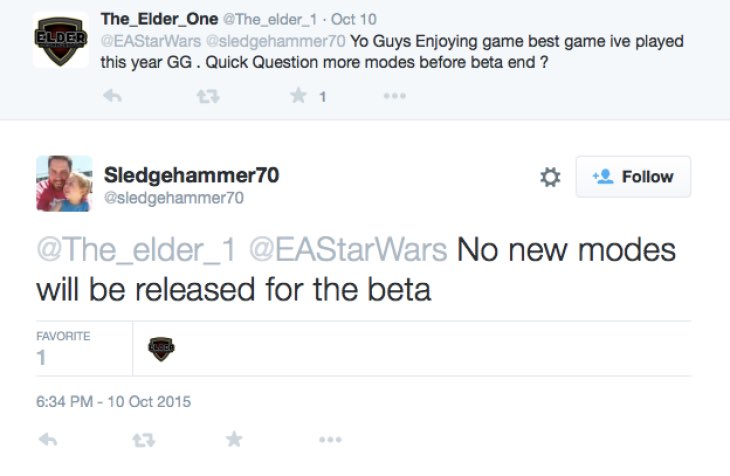 Treyarch had paved the way recently by constantly updating the Black Ops 3 beta with new maps and weapon unlocks. Sadly it won’t be the same with the Star Wars Battlefront beta, as you can see with the confirmation from CM Sledgehammer70 above.

Still, there’s a lot of excitement to be had on Hoth on the Walker Assault mode, so there shouldn’t be too much doom and gloom about this.

We’ve see some make comments on social media on how the game “isn’t worth full price”, but do you say that this is rubbish and will be buying the game on day one, based on what you have seen from the beta?