It’s now been almost a year since Samsung released the Galaxy Tab A 8.0 and 9.7 Android tablets, and so there are many fans that presume we are likely to see some sort of refresh next month. However, we know that when it comes to their tablets, Samsung never usually follows the same release pattern as they do for their flagship handsets, the latest of which is the Galaxy S7.

So while the jury is still out as to a new Galaxy Tab A 8.0 and 9.7 model update for 2016, our attention now turns to the current versions and the upgrade to Android 6.0 Marshmallow.

It was back in February that Samsung confirmed that both Tab A tablets were getting the Marshmallow update, although there does not seem to be any specific date as yet. 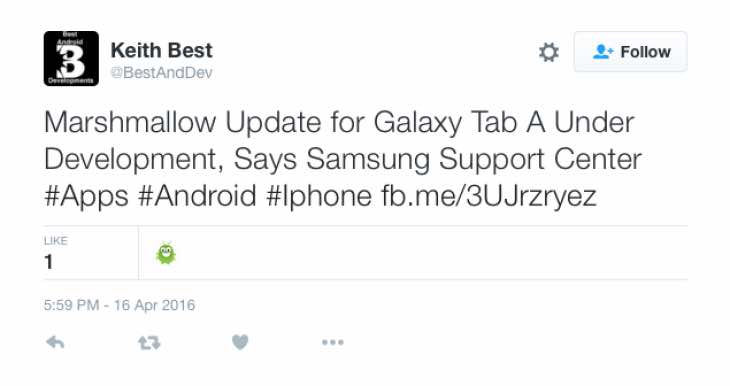 This is very concerning seeing as though these tablets are now 11 months old, and Android 6.0 has been available since late 2015.

The latest information that we have found in regard to the Samsung Galaxy Tab A 8.0, 9.7 Marshmallow release dates from a Tweet that you see above that states the update for Galaxy Tab A is under development, which is said to have come from the Samsung Support Center.

We just do not understand what’s taking so long, especially as Android N is already being previewed, although this is the very nature and the reason so many of you are reluctant to make the jump from iOS to Android because of such slow support for non-Nexus devices.