As you may already know, Kno are responsible for the dual-screen e-reader tablet designed for students. Well it seems they are set to sell their hardware side of things in order to concentrate more on their software ventures.

The Kno reader featured a dual-screen touch-screen display each measuring 14.1”, up to eight hours battery life, 16GB memory and a Tegra 2 chip. It also had a stylus for those who prefer it. More details about the device can be found at Engadget.

Kno recently stopped shipping the devices, only delivering a few hundred of the pre-order. As Engadget reports the reason for this because they have been considering the option to sell off its hardware and continue to provide software for companies such as Apple and Android based devices. 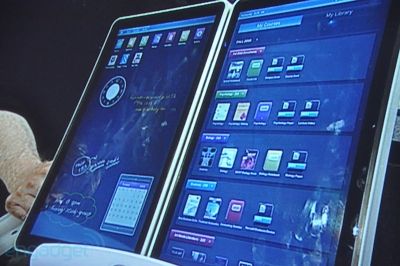 Sources at All Things Digital suggest this may be down to the ‘quicker than expected’ production of tablets from many other companies, making Kno’s efforts seem unrecognized. They are now said to be in talks with two major about selling their hardware. The two companies are not yet determined but the company is said to have signed a NDA with one of them.

Do you think this is a wise move for Kno or do you think their dual-screen tablet would have made an impact on the market?