We can see that Valve has had to forcefully step in and alter their own Steam page for No Man’s Sky, after thousands of gamers attempted to get a No Man’s Refund on Steam and PSN after growing frustrated with the game soon after launch.

At the current state of affairs, both the No Man’s Sky PS4 and PC Metacritic pages have rather unsavoury scores – largely made up of negative comments from those who complain about the amount of repetition used in the game when things suddenly start to get a little too familiar during the grind.

Now if you haven’t heard, this then led to the masses attempting to get refunds for No Man’s Sky. Some were successful, others were not and on Steam at least there was a big rumor on Reddit that Valve were handing out refunds regardless of playtime. 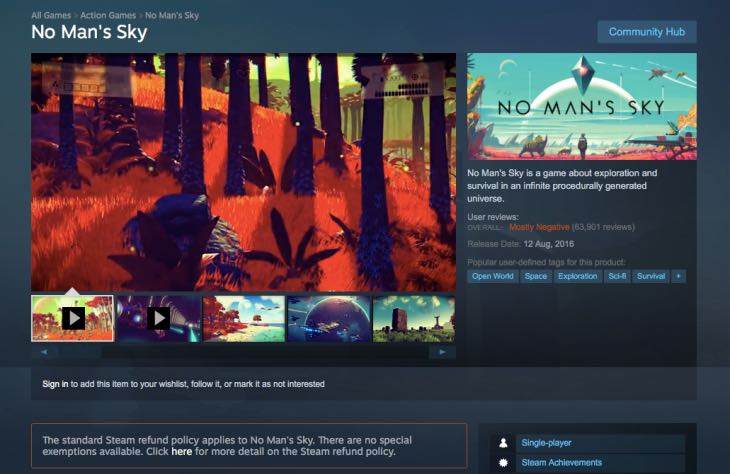 It seems that this rumor was not true, or Valve may have just been too lenient when dealing with customers case by case. Take a look at the extra block of text that Valve has now added to the Steam listing, seen in the image above.

For PSN users, there has been evidence of Sony honouring refunds for the game on Reddit here but again it seems to be hit and miss and you have to go through Sony’s live chat system and hope that the agent you get is ‘understanding’.

We want to know your current status with the game, have you been trying to get a refund on your purchase? Let us know below in the discussion section on whether you were successful with this and if so, the method you used.