When we first heard about the Motorola Xoom we presumed that it would come with Flash support out of the box, however according to a recent Engadget article this will not be the case, this is a huge surprised given that Flash support is usually a major selling point when you compare Android tablets up against the iPad.

On February 24th Verizon will begin selling the Xoom, it ships with Android 3.0 Honeycomb and will set the standard for other Honeycomb to follow, we thought it would come with Adobe Flash 10.1 pre-installed, however we are now told that Flash will arrive for the Xoom in Spring 2011.

If you head over to Verizon’s Xoom listing you will notice some smallprint at the bottom, below we have embedded an image showing this smallprint clearly saying “Adobe Flash expected Spring 2011”, spring 2011 starts on March 20th and ends on May 3rd, therefore anyone who buys the Xoom on its release date will have to wait at least one month for Flash support. 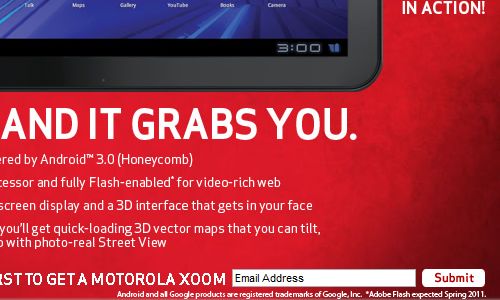 It is unclear as to why Flash 10.1 will not come pre-installed, we can only presume that it was unstable or perhaps had an adverse effect on battery life, as Engadget point out at least there will be no Flash ads for a while, which will please a lot of people.

Does the lack of Flash support out of the box put you off the Motorola Xoom?