NetherRealm Studios and Warner Bros have just shown off a brand new gameplay trailer for the upcoming PS Vita edition of Mortal Kombat. Contained in the trailer is a segment which looks to be a rather excellent augmented reality feature, but unfortunately it has now turned out to be possibly the ultimate tease that never was.

The trailer focuses on the aspect of being able to play Mortal Kombat where ever you happen to be thanks to Sony’s new portable. To portray this, NetherRealm Studios has used live action backgrounds such as a busy street with cars or even a quiet library with students reading their books, in the form of backgrounds while the frantic action is going on in front of you on screen.

On first glance, this looks like a very cool AR feature that has been added to the portable version, but we now have confirmation from Ed Boon himself that really, it was just a ‘cool promotional video’ and that there will not be any augmented reality features in the game after all. It’s a real shame too as they seem to have confused a lot of people with this trailer as it certainly gives the impression that you can fight with these brand new AR backdrops.

Dare we say it, but is there a hint of false advertising perhaps? The game will be available this Spring, so in a few month’s time but how awesome would it be if they quickly went back to the drawing board to implement these new AR stage features? Maybe it could be something to work on for possible Vita DLC if the demand is high enough.

As for the game itself, the Vita version does contain other exclusive features on the handheld that won’t be available on console. These include 150 new challenge tower missions and also the ability to complete certain missions using touchscreen and the rear pad controls. There’s also the option to play as Shao Khan and all the DLC and costumes from the console version are included in the package as well. Kratos will be available too, so there’s little reason not to pick this up if you didn’t play the console version. For all those that did, the price is going to be the crucial factor. 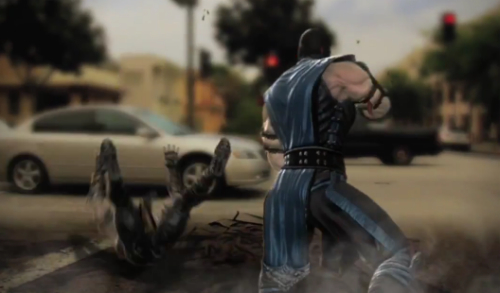 What are your thoughts on seeing these AR stages in Mortal Kombat – did you think that it was a feature in the game at first too?