If you suddenly feel the urge to pick up a Nintendo Wii console since they are going for next to nothing these days, we have a word of warning for you to consider. It looks like all new hardware units from now on will ship without Gamecube support.

If you’re a fan of retro gaming, this is going to serve as a kick in the teeth as it was always a nice bonus to be able to slip in your timeless Gamecube disks for when your friends come over for a session.

Unless you have the GameCube console itself however, this is no longer going to be possible for you, as just like Sony did with PS2 support, Nintendo are removing this functionality from all new consoles. One example of this can be seen in the recently announced New Super Mario Bros Wii bundle which will be hitting shops on October 23, priced at $150 as reported from Joystiq.

The bundle will consist of a black Nintendo Wii console, the New Super Mario Bros game, a black Nunchuk and also a bonus CD containing tracks from Super Mario Galaxy. As also noted by Joystiq though, is a little ‘retro’ loophole that you may want to consider if you are buying a Wii. Nintendo has confirmed that they’ll also be selling the exact same bundle, but with Mario Kart instead of New Super Mario Bros for the same price. The big difference between the two bundles though, is that the Mario Kart package retains support for GameCube titles – mind boggling stuff from Nintendo perhaps? 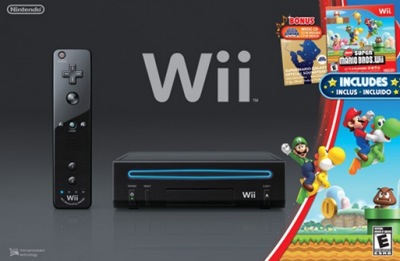 With that in tact, we have a feeling that the Mario Kart bundles are going to be in very short supply once gamers find out this little piece of info about GameCube support. If you don’t own a Wii, the next time you head into a game store and see the Mario Kart bundle on offer, it may be worth paying $150 for the last chance of having the opportunity to retro game once again with your GameCube classics.

Our question to you: Do you even use GameCube support on your current Wii?