We have previously told you about rumors suggesting that specs of the Nintendo Wii 2 will include an controller with a built-in innovative touchscreen, and now we have an concept image of the design to show you, which could be pretty close to what Nintendo unveils at E3 2011 in June.

Just to refresh, we are hearing that not only will the Wii 2 be more powerful than the Xbox 360 and PS3, but it will also feature a touchscreen controller with built-in motion control, with sensitivity on par at least with Sony’s PlayStation Move device.

IGN has come up with a pretty nifty design based on these ideas, and it gives you a great idea of how the device may turn out to be, check it out below: 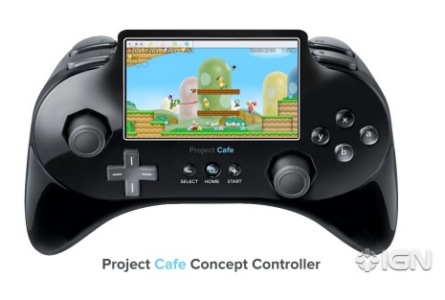 As you can see, the picture shows a rather large touchscreen slapped in the middle of the controller, and if IGN’s report is accurate – this may turn out to be a 6-inch screen we’re dealing with. Not only that, but this screen will be touch supported and will have a HD resolution! Underneath the screen we also we the Project Cafe codename which is floating around, and included dual analogue sticks and shoulder buttons.

Immediate questions now, are whether this touchscreen controller will include ‘multitouch’ support for greater control, wireless connectivity via Bluetooth and Infrared, and what type of battery system will actually power the thing.

What we want to know from you though, is whether you think this touchscreen controller is a good idea or not, or just an unneeded gimmick that is unlikely to benefit the gaming industry. Do you think the image above is an accurate mockup, and would you consider buying one?

As always, we’ll inform you when we have fresh details on the Wii 2.