As some of you may be aware, the Tokyo Game Show kicked off today in Japan. The video gaming event takes place annually and this year began with a Nintendo 3DS conference. During this conference, Satoru Iwata, Nintendo’s President, took the stage to discuss the gender issues that the company has with its 3DS before announcing the new Misty Pink 3DS.

Iwata explained that the company’s 3D capable portable console is mostly used by males and the launch of the new pink model is their way of getting more females interested in it. He announced that it would be launching in Japan October 20th along with some new, female targeted games such as a new Girls Mode title and a sequel to Tomodachi Collection.

Before the reveal, Iwata presented a comparison chart, which represented the sales of their current consoles, including the DS and Wii, amongst the different genders. It showed that the number of female consumers of the 3DS was behind the total number of both the DS and the Wii. The company will be hoping to change this with the launch of this more feminine color handheld.

No details of whether the Misty Pink version of the 3DS will be making its way to the US or Europe were disclosed, meaning that for now it will probably be another Japanese exclusive. We should be used to these by now, as the nation often gets first dibs on the cool stuff. Earlier this year we brought you news of a silver PS3 headed their way, which we are still yet to see in the UK. At least we finally can now finally get our hands on the white PS3.

Will you be getting a Pink Nintendo 3DS? 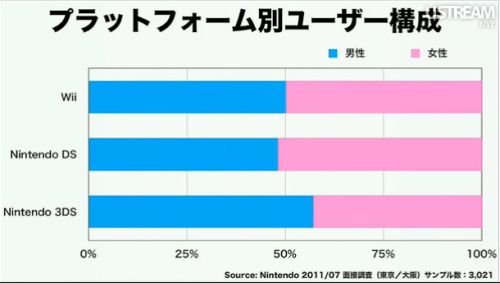