Nintendo enjoyed a lot of success with the Wii, and hope to follow this up with their new 3DS portable games system, although the brand seem to have lost their way when it comes to the Wii 2 release. It’s the view of some analysts that the Wii 2 needs a 2011 release for Nintendo to “keep in the game”.

Today we have received word from Nintendo about their upcoming games for 2011, which includes the line-up for Nintendo DS and Wii games. You can see the list of upcoming titles on this page; we thought it would be good to embed images of the tables sent to us by Nintendo. Do you see any games not listed that you’re looking forward to? Let us know in the comments. 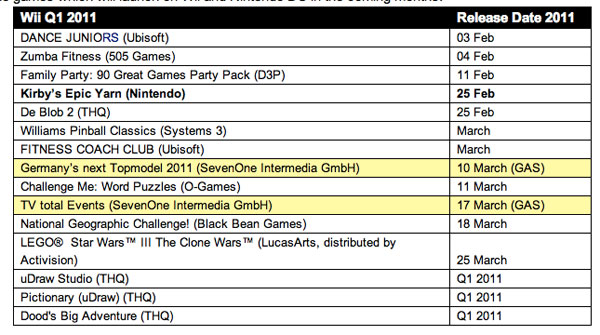 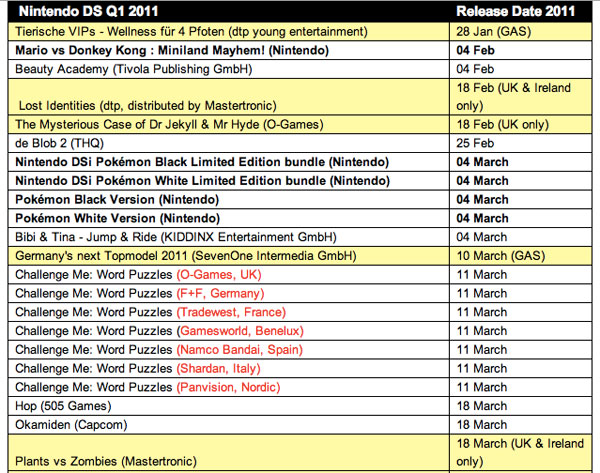 Nintendo also took the opportunity to plug how well they are doing – sounds like an Apple Keynote — and showed some figures, which explained they outsold “any other home console” during 2010. They quoted Europe moving 5.44 million Wii systems, with a total install base of 26 million in Europe.

The Nintendo DS sold 6.69 million units during 2010, and that is said to be more than “any other” handheld console. The tables above show you a taster of games launching in 2011 for Nintendo DS and Wii.