Nintendo has just finished up with their investor meeting for October 2015 and now we can reveal the first details on Nintendo Account and My Nintendo Points system – two big changes coming to users soon.

There had been some confusion on social media over the past few hours, on whether Nintendo Account was the same thing as My Nintendo or vice versa.

We can confirm that Nintendo Account is going to be the new service for Nintendo user IDs, while My Nintendo is a different system entirely which will grant points for users playing Nintendo games on console and smartphone.

This is a very exciting prospect as Nintendo has said that My Nintendo points can be redeemed digitally for DLC, as well as other Nintendo goods and coupons. 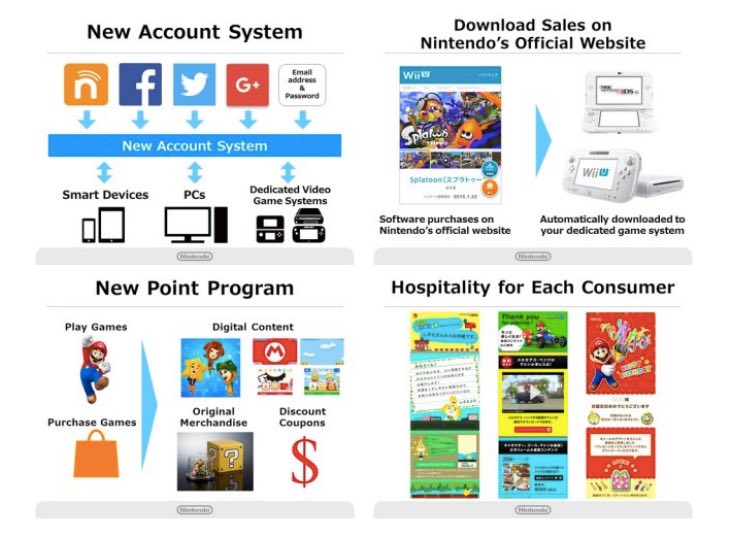 Getting rewarded for playing games with items that would usually cost money? This will be the stuff of dreams for many Wii U and Nintendo NX owners if our assumptions on the points system is accurate.

The diagram above courtesy of Nintendo Everything should help to summarise the new features that Nintendo will introduce to users soon.

With Nintendo now venturing into mobile games with Miitomo due out in March 2016 with My Nintendo, the idea of having one account that covers smartphone and console seems logical.

Nintendo has also said that Nintendo Account will utilize cloud technology for save data and characters. You will also be able to use Facebook, Google+ and Twitter with Nintendo Account making it even more convenient for users when the transition arrives.

Do you like the look of Nintendo’s new Account and Point system? Give us your reaction to the announcement below – could the Point system make current PS4 and Xbox One users move over to Nintendo?