The Nintendo 3DS was launched yesterday in Europe, and arrives in the US on Sunday. But are the Nintendo 3DS games at launch not exploiting potential of the new console? There will be sixteen games available on launch day, but it seems developers have cut corners to be ready in time.

Chris Kohler of Wired.com has written an article looking at what is available for the 3DS game wise at launch. Some of the games which will be available are very short, or are just rush jobs brought over from other consoles. The games are not bad, but just don’t seem to fully exploit the 3DS potential.

The games will retail for around $40 a go, so you will not want to waste your money on a dud. Steel Diver is a fun game, especially in the Periscope mode where you have to swivel round a full 360 degree angle to find enemy ships and launch torpedoes at them. But the game is a little on the short side, and has none of the online play or StreetPass features.

Pilotwings Resort lets you fly planes and hang gliders over a series of courses, but when these are completed there is not much point in keeping the game. Ridge Racer 3D is a fun game but it does not make full use of the 3D graphics, often looking like a normal 2D game. But it does use the StreetPass feature of the console. 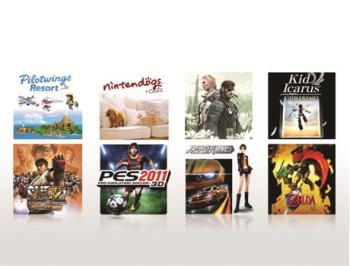 The 3DS does look like it will have a great future, but owners will have to wait for better games becoming available. In time developers will start to really push the technology and release better games. It is only recently that we have seen games that fully utilize the full potential of the PlayStation 3.

Use the link to read about all of the 3DS games available at launch. Which launch games do you like the look of?