After giving you a gameplay preview of the online multiplayer mode that will be featured for the first time in Ninja Gaiden 3, we can now confirm and unveil to you the special Collector’s Edition of the game that will be available at launch.

It has become apparent these days that the majority of notable game releases come with a Collector’s Edition. The most obvious one to release recently was the Collector’s Edition of The Elder Scrolls V: Skyrim in which players could get their hands on a limited edition Alduin dragon statue.

Now, it teams that Koei Tecmo are following a similar pattern to Bethesda, as the Collector’s Edition of Ninja Gaiden 3 will give the opportunity for die hard fans to take home a collectable figurine of hero Ryu Hayabusa in battle.

The figurine will be given a proper title of ‘Duel of the Mask’ and it is easily the best goodie to come included in the Collector’s Edition. Other contents include a Ninja Gaiden artbook, an official soundtrack featuring music from the game, and last but certainly not least a demo copy of Team Ninja’s fighting game, Dead or Alive 5 which will hit consoles later this year.

While the contents of the Collector’s Edition are certainly generous, the most important aspect is price. We can tell you that in the US, the whole package, including a copy of Ninja Gaiden 3 will come in at $99. Just for comparison purposes, the Collector’s Edition of Skyrim was priced at $150 and didn’t include a game soundtrack CD.

We’re a big fan of video game music so paying $99 for all of this content is a great deal in our opinion. The demo for Dead or Alive 5 is a great bonus as well, so we have a feeling that most Ninja Gaiden fanatics will opt for the Collector’s Edition, as it should only mean that US games pay around $40 extra for all the other goodies and a lovely CE box.

What are your thoughts on the Collector’s Edition for Ninja Gaiden 3? Will you be picking this up in March, or do you think the actual gameplay showings of Ninja Gaiden 3 haven’t done enough to secure your purchase yet? 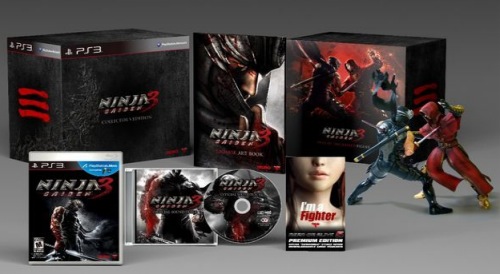