If you are looking to buy a new smart camera in 2014, we think we have something that may appeal to you. Nikon has come up with a new camera that is tailor made for hardcore usage. Meet the Nikon Coolpix AW120 that comes with a camo skin as well as shock and waterproof features.

It is one of the coolest cameras we have seen from Nikon in a while and it’s great to see them combine style with ruggedness for those avid photographers who are a looking for a bit more protection whilst on adventures.

The Nikon Coolpix AW120 is shipping right now and Nikon has already set a Coolpix AW120 price of around $350 in the US. For our readers in the UK, we expect the camera to be available for around £330 instead which isn’t a bad price at all.

Aside from being shock and waterproof, Nikon is also claiming that the Coolpix AW120 is freezeproof as well. As for tech specs it features a 16 megapixel sensor, built-in WiFi and more features to suit the outdoors such as built-in GPS, mapping tools, an electronic compass and even a Points of Interest (POI) mode.

You’ll be pleased to hear that this is still a very impressive camera for shooting videos, with full 1080p HD support. It also features a built-in microphone allowing you to record audio in stereo quality as well, which is impressive.

No longer will you have to worry about this camera geting wet or dropping it on the ground whilst outdoors. It will handle everything that you throw at it and will even blend in with the environment as seen in the close-up camo skin pictures. 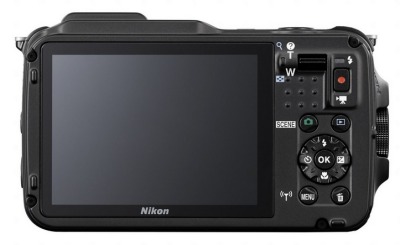 Nikon warns that this camera is already in high demand, so place your order now if you are interested. You can buy one still from Amazon via this link. Is this the kind of rugged camera that you have been waiting for?