One of the most surprising transfer news this week is Nicklas Bendtner to Nottingham Forest, which has now been confirmed. The ex-Arsenal striker has a cult following on social media and now all eyes are on EA to see what rating Nicklas Bendtner will be on FIFA 17 Ultimate Team.

FIFA 17 ratings are big business of course and everyone is looking to see what rating their favorite player is. ‘Lord’ Bendtner is no different and it will be interesting to see if he is in line for an upgrade or downgrade from last year.

On FUT 16, he was given a 75 rating at Wolfsburg with a rare gold card. That featured stats such as 73 shooting and heading being his stand out ability with an 83 – he also has 84 for strength which is pretty good. 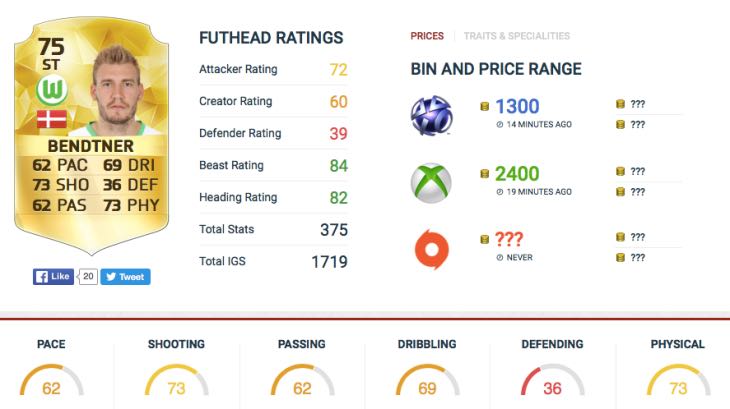 With this in mind, would you keep Bendtner at a 75 for FIFA 17 or will he get downgraded due to a below par performance last season? Check out his FUT 16 stats in full above courtesy of FUTHead.

The fact that he has a card alone at Nottingham Forest will be good enough for most players, as we can definitely see some players pulling out their Bendtner cards in Online Seasons – just for the fun of it.

What should Bendtner’s FIFA 17 rating be? Leave a comment below and we’ll let you know when EA confirms it!