We have heard about iPhone 5 prototypes including NFC inside them before, although it seems that 2012 is a different ball game when it comes to companies betting on NFC, and chances of Apple’s iPhone 5 including this feature when it gets a release date at the end of this year. If this happens then sales of airline tickets could see one name stand out from the crowd, according to a number of analysts, and that is Apple and their NFC iPhone of course.

The 2012 Air Transport IT Summit would obviously favor news surrounding advancements towards the airline industry, although they would not favor any one platform and that means innovation from Android and iOS would be welcomed. The delegates also understand the reach Apple has and what it would mean if NFC landed on the iPhone 5, and took payments for airline tickets.

SITA’s CTO, Jim Peters, understands this all too well and explained to delegates that an iPhone 5 with NFC would be “game over” for those debating the technology, which he feels it “is coming“, and they need to “get ready” for widespread adoption. You can see his exact comments below and also the full article here, which explains how boarding passes will be the next step for this short range communication technology. 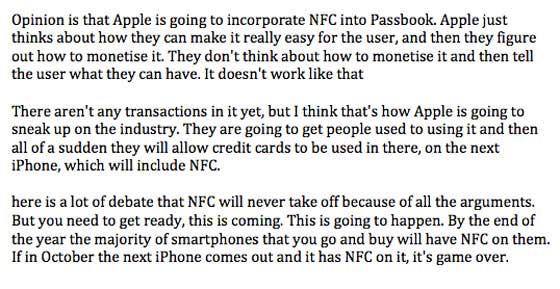 At the time of writing Apple has not confirmed they will include NFC on the iPhone 5, and are unlikely to confirm any detail until an event of their choosing, although several leaked images and documents give weight to this possibility and could set the iPhone up for commercial success.

Would you like to see the iPhone 5 include NFC, and if so how would you like to use this technology with your next iPhone? Those of our readers tracking updates to the iOS 6 beta might want to read an article we published earlier today.