We have something very cool for you to check out now, especially if you are preparing for the 2014 FIFA World Cup in Brazil. One of the stars of the tournament, Neymar Jr has just starred in a massive new Beats by Dre Advert called The Game Before the Game.

This is one of the best ads that we have seen before a World Cup tournament and we think most of you will agree. This one is rather special though as it features a vast array of stars from the sporting world.

Beats by Dre, fresh from their monumental acquisition by Apple have released an Ad that everyone will enjoy. It’s almost like a spot the star trailer as you may find it difficult to pick out every single star that features in the Ad – in fact we challenge you. 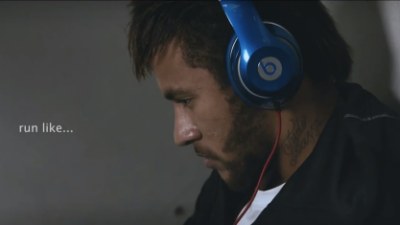 Neymar Jr is the highlight star though and you will see him many times in the clip, including a cameo appearance from his father Neymar Sr. There are also notable appearances from Liverpool’s Luis Suarez and Daniel Sturridge and also basketball superstar Lebron James and Hip Hop star Lil Wayne.