A few months ago we wrote an article asking Samsung Galaxy S owners if they were planning to upgrade to the Nexus S, even though the Galaxy S is still pretty new. We now want to hear the thoughts of Google Nexus One owners.

If you are currently own a Nexus One handset, the chances are that you’re still satisfied with it are fairly high, as the Nexus One remains one of the best and most popular smartphones on the market.

However, it is fairly outdated now, and just like iPhone owners, consumers usually jump at the chance to buy some upgraded hardware. And upgraded hardware is certainly what you’ll get with the Nexus S, as in terms of a spec comparison, the Nexus S wins the battle with the addition of a larger screen (4-inch), front facing camera, Bluetooth 3.0 and of course Android 2.3 Gingerbread in the box, although the Nexus One is likely to be the first existing handset to receive the update before the end of the year.

It will most likely come down to personal preference though, and unlike other handset sequels, the Nexus S is built by a different manufacturer – Samsung, whereas the Nexus One is a HTC phone. If you are looking for a more detailed comparison between the two handsets, we’ve found a great article over at Pocket-Lint for you to take a look at. 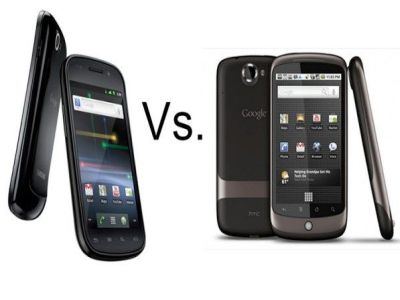 As a Nexus One owner, are you tempted to upgrade to a Nexus S, or are you going to keep your current handset? On a side note, we’ve included a short clip of the cool NFC feature on the Nexus S, check it out below.