When Apple released the iPad Air last year its performance was rather impressive, although it did not take rival Android tablets from the likes of Amazon and Samsung long to close the gap, especially in terms of multiple core benchmarks. However, even though they packed more RAM and faster processor clock speeds, they were not able to match single core score performance, and believe it or not, could only match the iPad 4.

It was only a matter of time before we got to see the results of some new benchmarks for the iPad Air 2, which looks into its triple core, 64-bit A8X Application Processor and shows on the chart below how much faster it is when compared to any other Android tablet, yes even Google’s Nexus 9. 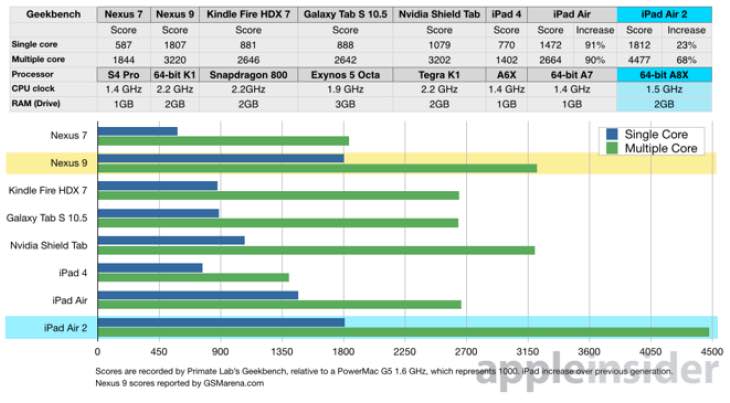 The the Nexus 9 vs. iPad Air 2 have been put through their paces for core performance, and for single core the former performs almost the same as the latter. However, when it comes to multiple core CPU performance, the iPad Air 2 with its A8X chip is 34.8 percent better than the Nexus 9.

It is worth noting that the Nexus 9 makes full use of the same Tegra K1 chip used in the Shield Tablet, and so you would have assumed its performance would have been better than it was compared to the iPad Air 2. We can understand that some of you will not believe such results, but we are told that the multi-core performance of the Nexus 9 is similar to that of Nvidia’s tablet, but when it comes to single core, Google’s tablet has it beat.

Do you ever take these benchmarks into consideration, or do you go on real-world results instead?