The Nexus 9 is not even a year old, yet there has already been talk of a second generation model being release early. However, those reports are based on mere rumors, and so should be taken with a grain of salt. However, a recent Nexus 9 price drop in the UK has been making people think otherwise, although this is still no hint of a 2nd gen model.

We can fully understand why many of you will be thinking that Google has plans for a new 2015 version of its Nexus 9, seeing as though its current hardware is not up to that of many rival tablets. However, the price cut is not going to change that fact, although might make it a little easier for people to part with their money now that it costs just £199.99. 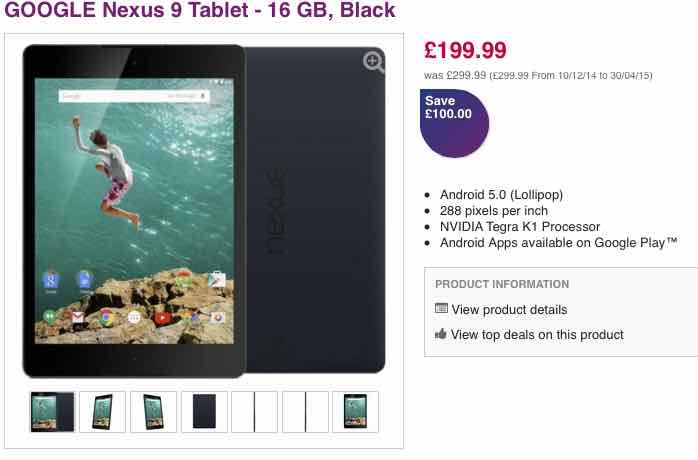 One of the main reasons why we feel this new Nexus 9 pricing does not point to a next generation model is the fact only PC World in the UK has reduced its price. There had been suggestions that John Lewis had also reduced the price of this Android tablet, although this is not the case because it still shows up at £299.99 and is showing out of stock.

If we were you, then you had best hurry and take advantage of the promotion, as we doubt this Android tablet will stay at that price for long. For those of you who already own a Nexus 9, then you can now download Android 5.1 Lollipop. It was only a couple of days ago when we were wondering what was taking this update so long, so at least we now have an answer.