Are you still trying to get hold of Nexus 9 stock this week? The new tablet from Google went on sale this week but it looks like a lot of you have been disappointed trying to get one at the first attempt.

HTC didn’t help matters further when they recently revealed that the Nexus 9 would be part of their ongoing HTC Hot Deals promotion in which HTC products are heavily discounted every Tuesday.

You may not know it, but on Tuesday November 4 the Nexus 9 was actually available to buy on HTC’s website for a stunning $199 – half price from the original $399 retail price.

It was part of HTC’s Hot Deals offer and was obviously available whilst stocks last. What happened though has since forced HTC into an apology. The sheer chaos that ensued as consumers hammered HTC’s website, caused the website to buckle under pressure and many were left frustrated in their attempts to grab the latest tablet at only half price. 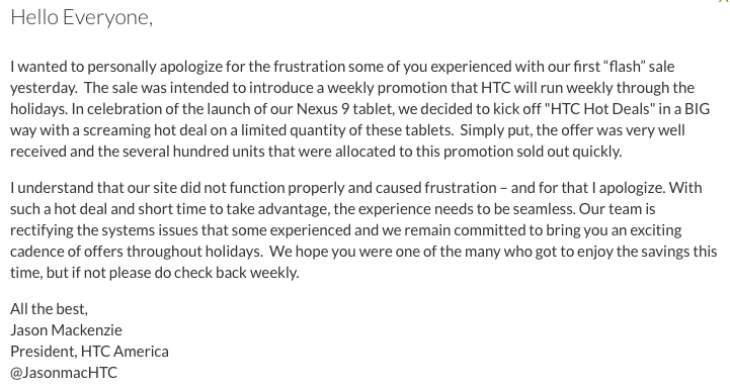 Such was the disappointment that it has actually forced HTC President of America Jason Mackenzie into a statement about the problems during the time that the deal was live – we’ve included the full statement for you to read above.

While it’s refreshing to see HTC’s President step in with an instant apology, the key thing to take out of the statement is that the deals will be back on again next Tuesday on November 11.

More importantly, you will want to stay glued to HTC’s website for the HTC Hot Deals start time of 9am Pacific Time or 12pm Eastern Time for another chance to grab the Nexus 9.

HTC are not confirming that the Nexus 9 will show up again, but we think the statement means it will – they just don’t want the servers to crash again.

Were you trying to buy the Nexus 9 for $199 on Tuesday? Let us know if you were successful, or if you were one of many who experienced technical problems.